G.I. Joe ARAH the cartoon series is by far my all time favorite television show ,past and present.The  constant thickening of  action packed plots,exciting  characters  and a soundtrack laden with funky drum beats and bass guitar riffs was enough to make any kids head spin.Heck i go nuts watching it now.As a kid i would always go to school the next day to discuss past episodes and what funny or cool things certain characters did in them.Quick Kick was a popular topic of discussion with his crazy antics and acting aspirations.Roadblock and Bazooka were always  talked about at one point or another and Cobra Commander’s perpetual whining about a foiled plan always drew laughs.Yet and still no one made bigger headlines those weekday school mornings than Snake Eyes!Those much anticipated  head-to-head confrontations with Storm-Shadow were legendary and the fact that he never spoke was too cool!Watching Snake eyes on television was one thing but owning the elusive action figure with Timber (his pet Husky) damn near made you the” Godfather” of  Joe collecting.Seriously if five kids asked you to spend the nigh that weekend and one of them owned a Snake Eyes figure,the latter  usually took  precedence.I never owned this Snake Eyes as a kid but was fortunate enough to pick one up a few years ago on line for a pretty decent price(considering how hard it is to find one loose under 20 dollars).He’s in pretty good condition with tight joints and although Timber was included with the figure none of his accessories were. 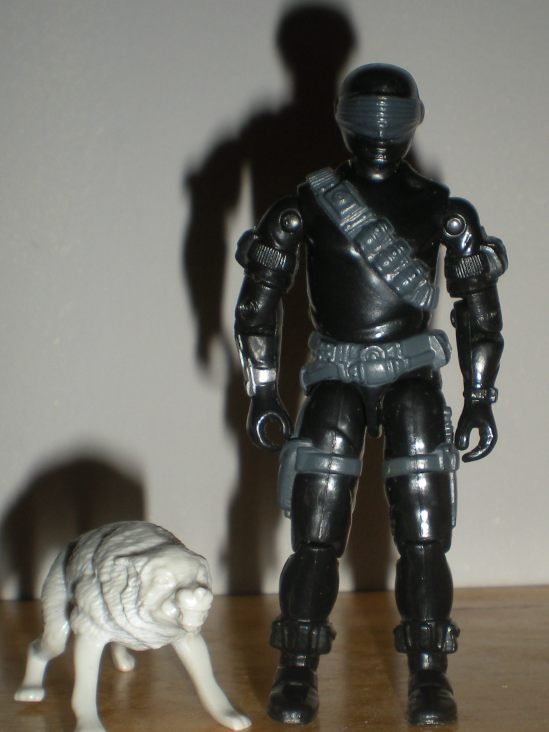