G.I Joe’s were(and still are) my favorite action figure line as a kid but every now and then a new amazingly cool cartoon would premier and it wasn’t long before i was compulsively walking up and down my local Gold Circle’s toy aisle looking for the toys associated with it.Even before the first Teenage Mutant Ninja Turtles cartoon series was released i was already hip to the  B&W comics of the same name put out years before by Peter Laird and Kevin Eastman.I remember playing outside with my Marvel Secret Wars Captain America figure when my buddy Stacey (LOL i still remember his name) came over to show me the book.I remember loving the way the turtles were drawn but not digging the fact that it was in black and white.I remember him telling me how this book was going to take off and me disagreeing.Boy was i wrong!While the book never became mainstream popular, the concept and characters did ultimately spawning a cartoon series in the late 80’s.I was hooked!My first action figure from that line was Raphael,then came Donatello and i think Shredder came next.Michelangelo would be the last figure from that line that i would pick up. One of the reasons i’ve started collecting toys again is to somehow get back some of those childhood memories and action figures that got passed down to my younger siblings or all-together disappeared.I so wish i still had my T.M.N.T. collection from back then.Long story short my boy jboypac recently sent me a package with a ton of toys and to my surprise there was all kinds of Ninja Turtle stuff .Out of the bunch my two favorite are these guy’s right here.I was going to do separate  posts for each figure but these two are an item.Bebop and Rocksteady should go down as two of the most iconic villains  in cartoon history!OH I almost forgot…Happy Veterans Day! 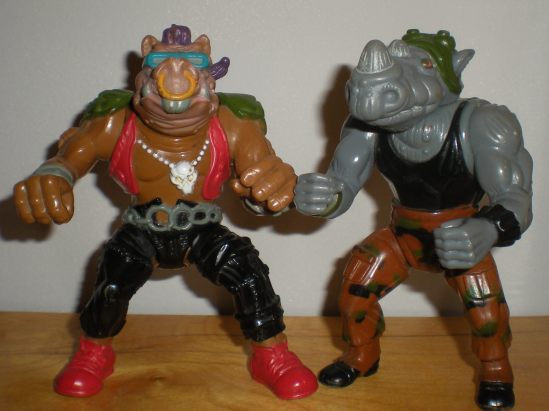