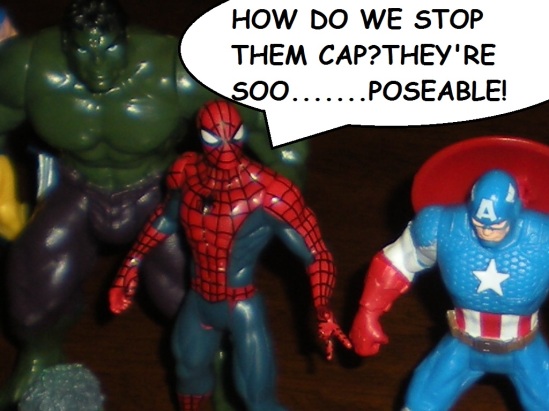 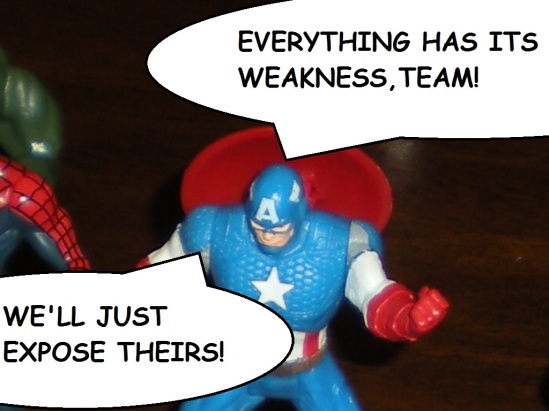 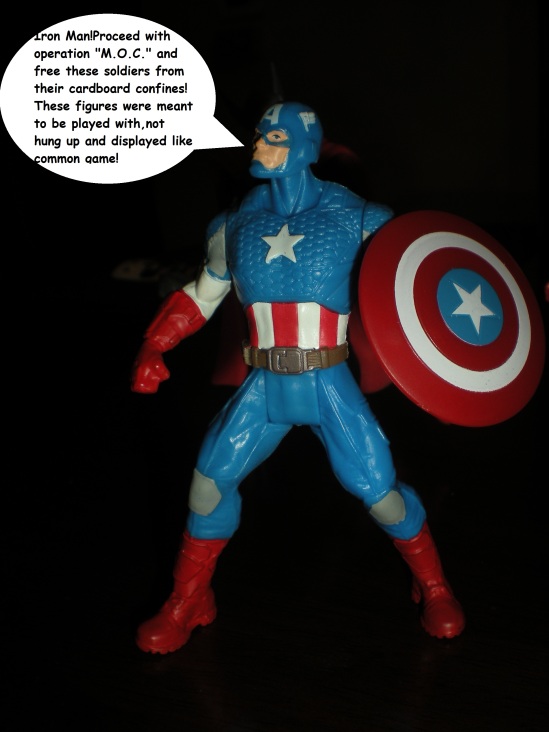 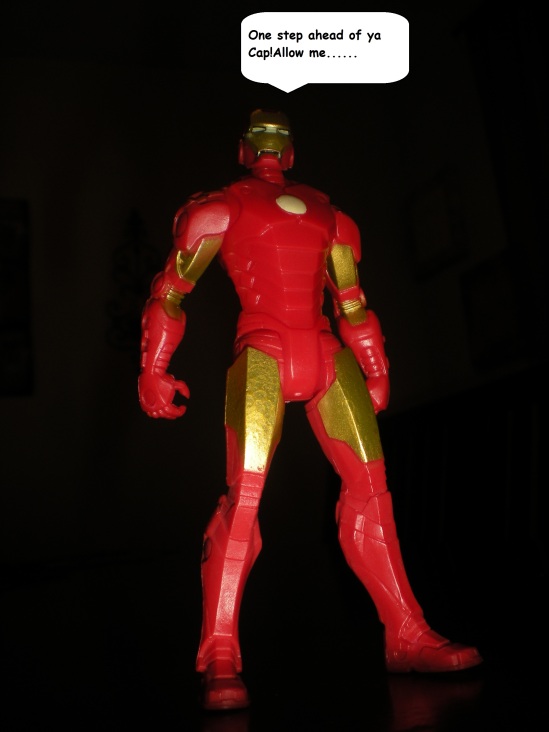 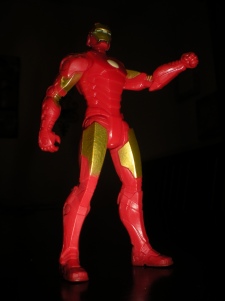 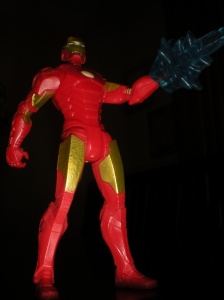 I’ve been after this figure almost as long as I’ve been after the 80’s Secret Wars version. This IMO is the ultimate Wolverine action figure! It’s that good. A brown suited Wolverine figure with this much articulation would have blown our minds as kids. If ever (and “ever” could mean very soon) I choose to sell off some of my collection, this one will be a definite keeper. In fact I’m thinking about setting up a website  to start getting rid of some stuff online and hopefully make a couple extra bucks in the process , and when I do, this guy is staying put 🙂 Everything from the facial expression down to the included sword, ala the  90’sToy Biz  version. The scale is perfect, too. The Wolverine Origins line  spawned some really cool  versions of Wolverine, this being one of them. Enjoy the pics! 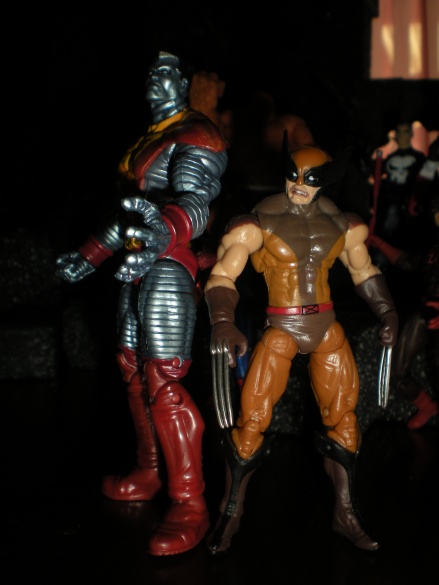 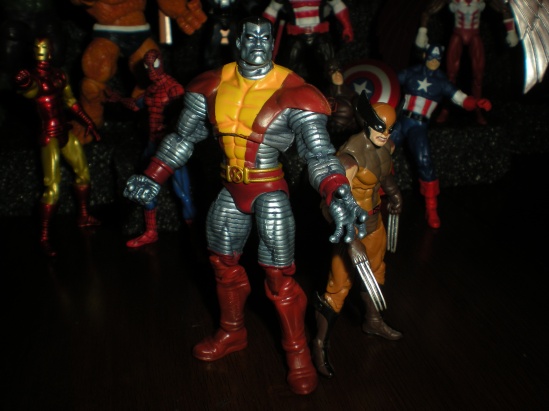 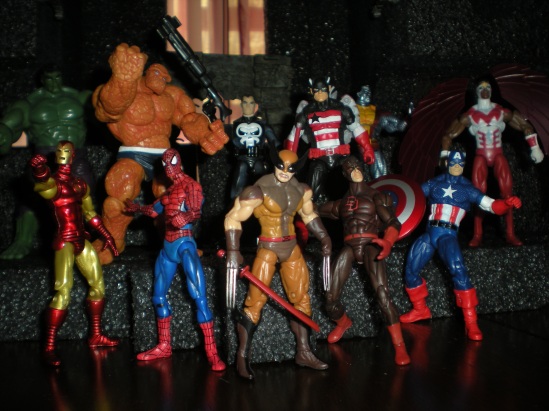 I’m generally not big into comics these days but while shopping at Dollar Tree (yes..the store were everything’s a dollar-No,not where they sell the exclusive line of G.I. Joe figures,that would be Dollar General)) for my daughters school snacks,i ran across these comic two packs put out by a company called Cards One.Each pack includes two vintage (not reprints) Marvel,DC,Image etc. comic books and this particular  two pack caught my eye.What caught my eye right away was the cover of  the first pack,which boasted a who’s who of Marvel heroes and immediately reminded me of the Secret Wars series.Upon closer inspection it turned out to be issue number 3 of the Infinity Gauntlet series.I’ve since unwrapped this baby and given it a quick read and absolutely loved it.Now I want the rest of them.I’ll do a quick write up on this awesome issue once I wrap up my ToyBiz figure countdown. 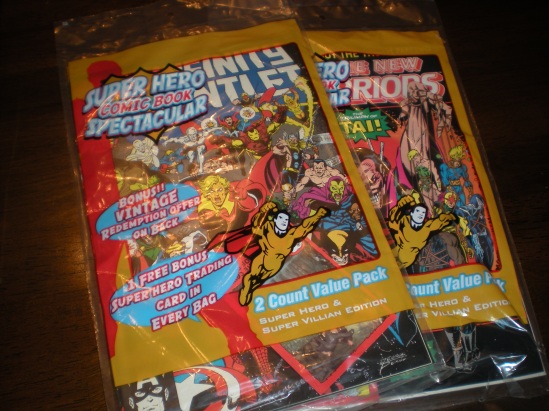 I’m finally able to post about this awesome guide to  everything Avengers!Flipping through the pages,i realized that i’m so out of the loop it isn’t even funny.While the major players are ever present,characters like Hulkling,Machine Man and a slew of other heroes and villains were all new to me.In retrospect,this book is just what the doctor ordered.I’ve got lots of catching up to do.Sorry about the blurriness of some of the photos.I tried to make them all as legible as possible. 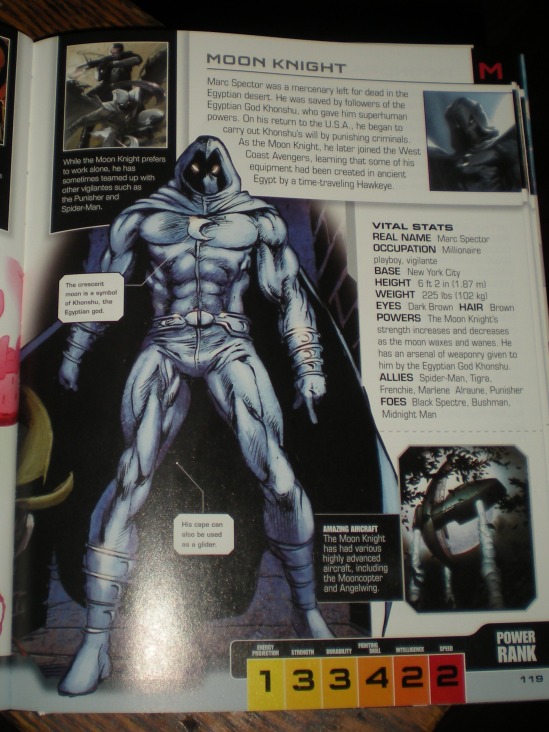 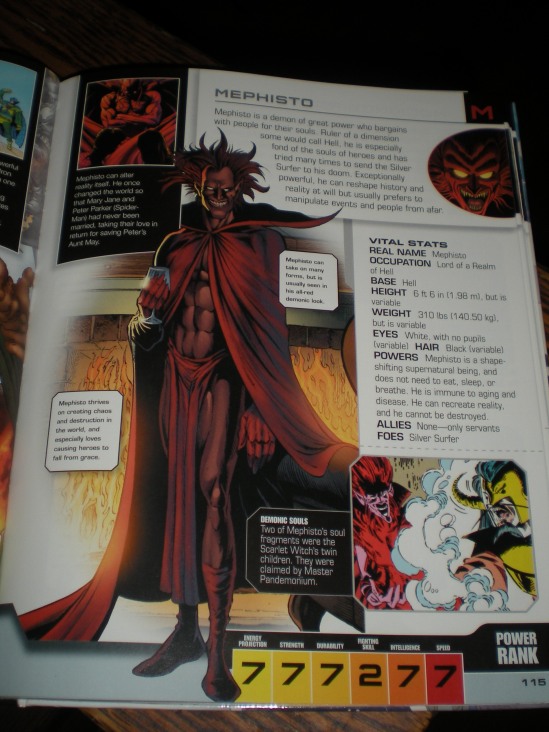 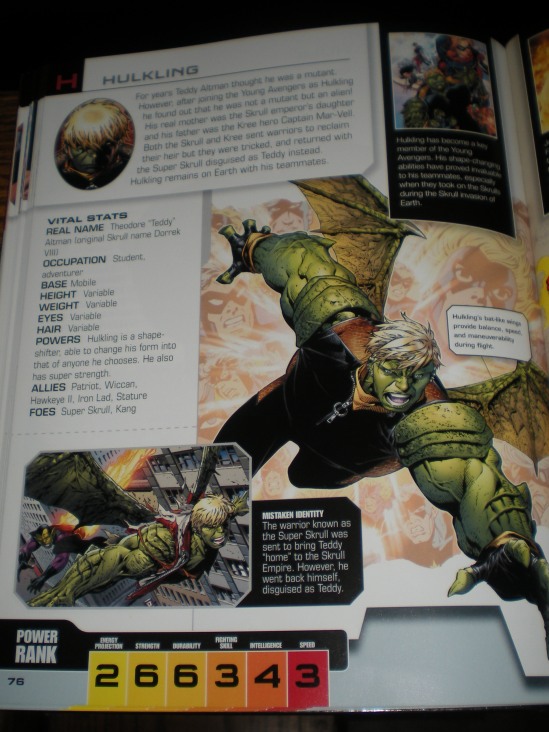 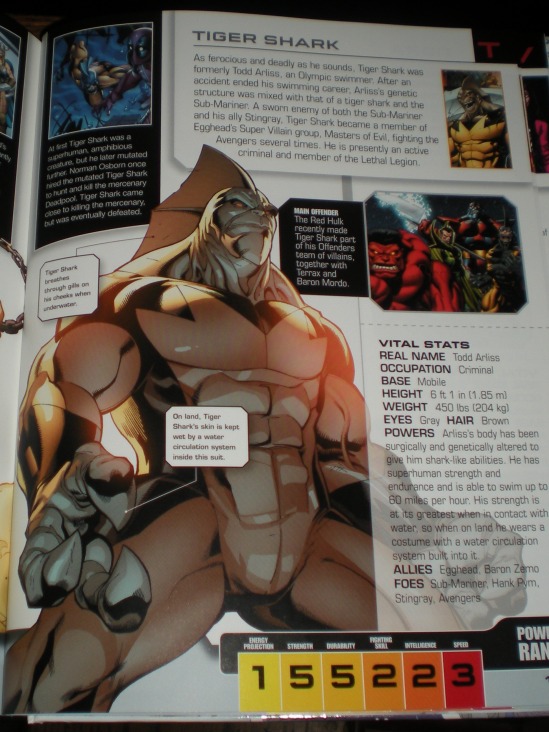 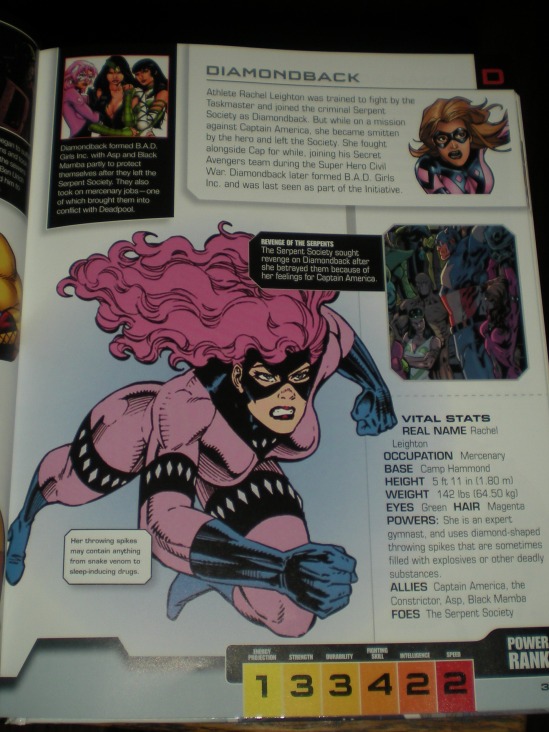 I found this comic pack marked down at a nearby Wal-Mart and could not pass it up.I really needed a Thing figure for my collection and the Bulldozer figure,while not a must have,is definitely a plus.

From what I’ve read around the internet this Thing figure isn’t the most popular but the only flaw IMO is his range of motion,or lack there of.He’s not the most poseable figure but he still looks bad a#$ when displayed!I also like the fact that he’s shorter than my Avengers Hulk figure.

I gotta admit,I don’t know much about Bulldozer other than the fact that he is part of the Wrecking Crew.This really makes me want to find the other three crew members -Piledriver,The Wrecker and Thunderball!I remember seeing these guys a lot as a kid as they would make the occasional appearance in random comics in my collection. 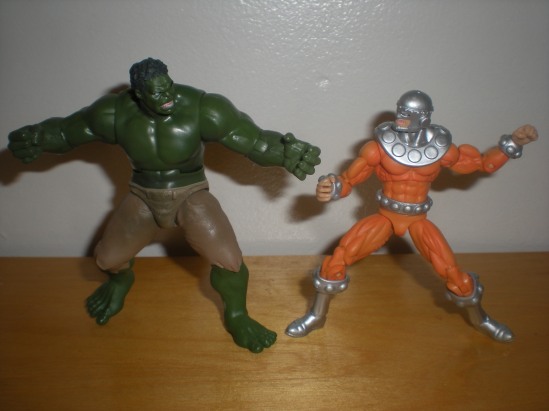 Comic books and action figures go hand in hand IMO.As a kid I would have gone nuts for these comic packs.Back then we were limited to reading a small three-framed strip on a card back or to a mini-comic at best.The comic included in this pack is Secret Wars #12 and while the story is dated,the various pin-up’s found at the end were a nice addition.More than anything, I dug the Marvel Universe action figure advertisements on the back of the cover! 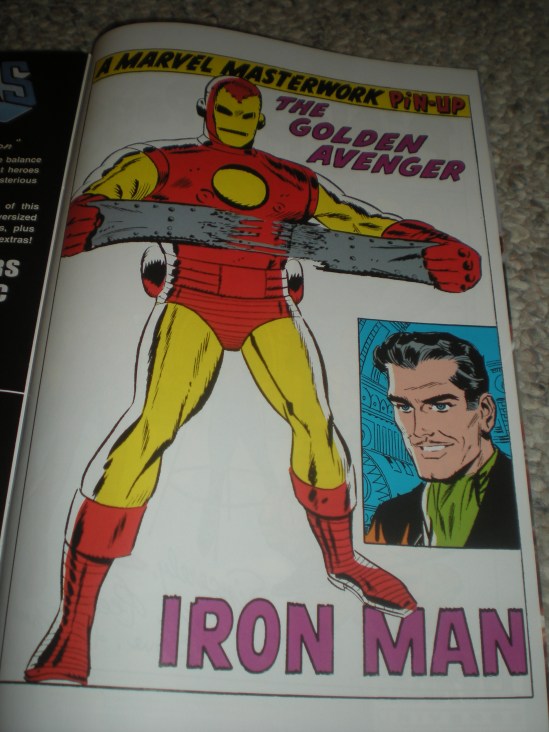 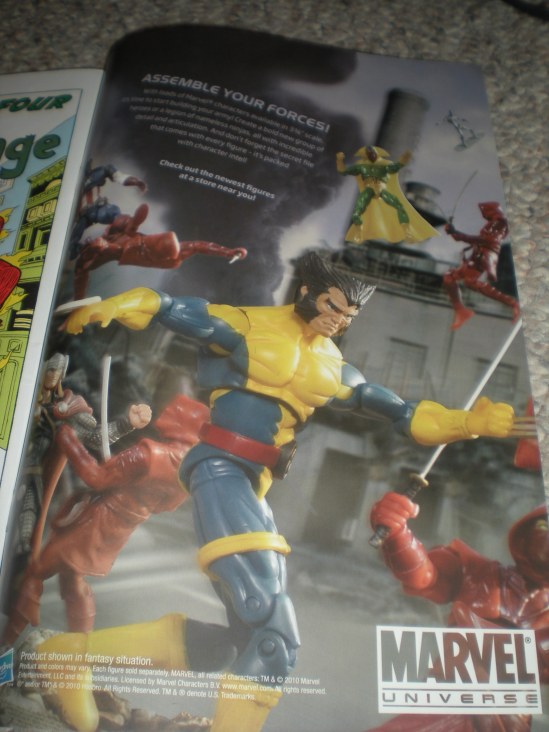 As i stated before in my last posts,spare time  has been rather elusive this week with everything that’s been going on.I was however ,able to snag up a couple of  items that I’ve  had my eyes on for a bit now.You’ll notice that one of the items is none other than the infamous “awkward hand attachment gun holding thingamajig” Retaliation Roadblock.Sorry guys but i had to do it lol!I know he’s got limited articulation and a ridiculously large weapon that connects to an even more ridiculous looking permanent hand attachment,but i just love this figure!The sculpt is bad a#$ IMO and i can’t wait to stand him next to my Heavy Duty and Gung Ho figures.Next up is Transformers Prime Wheeljack.What caught my eye when i saw this guy on the pegs at Wal-Mart was the throwback design and the sword accessories.I like this line of TF’s and will probably pick up a couple more from it in the near future.Last we have a 3 pack of Marvel comics that i found at a local Family Dollar for $2.50.Reading comics can be very relaxing and a nice way to take the edge off of a rough day,and while these aren’t premium comics they should serve their purpose.So there you have it guys!I apologize for the lack of commenting and replies on my part and hopefully things will get back to normal around here so i can get this blog thing rolling again 😉 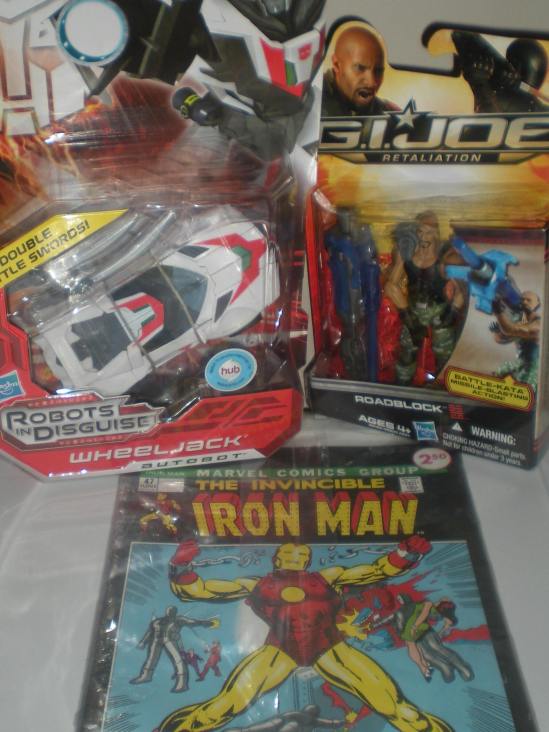 AF&T
Create a free website or blog at WordPress.com.