A while back i posted a “Most Wanted Action Figures” list here on Action Figs & Things,and one of those figures happened to be Toxie from the 90’s cartoon series “Toxic Crusaders”.Fellow blogger and good friend jboypacman  (http://revengefromthecosmicark.blogspot.com/) just so happened to have a Toxie figure and very kindly offered to send it over to me.Seeing as this was a figure that has eluded me in the past and had been on my radar for a long time now i could not refuse the offer. So i get home today and darn near trip over a package  left there for me by my post man and wouldn’t you know it,it was from jboypacman!Here i am totally psyched about jbp sending me just the Toxie and he outdoes himself..again…by sending me a shoebox sized package full of goodies(which i’ll be posting about  very soon). Not only did he send me a Toxie figure, it was a  100% COMPLETE TOXIE!Holy crap i nearly lost it when i saw that his American flag adorned mop with the rest of his accessories were all there. Now my very first memories of Toxie stem back to the early 80’s when the live action film “The Toxic Avenger” released.After that i think a video game was released and then ultimately the cartoon series.I’ve always loved this figures color scheme, overall look and detailed sculpt.I’m not surprised that Playmates released this line of figures as they were released in the 90’s and Playmates pretty much had that decade on lock.A super huge shout out  and genuine thank you goes out to jboypac 😉 ! 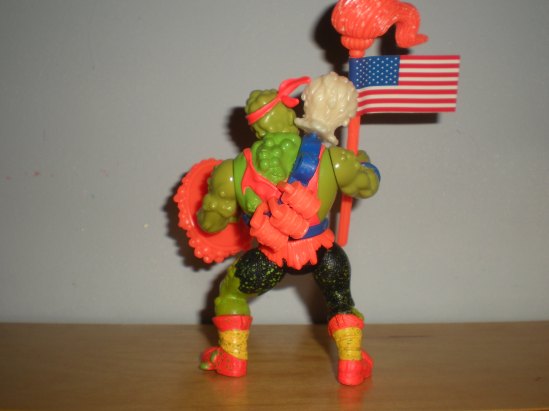